Notre Dame Film, Television, and Theater professor Mark Pilkinton’s much anticipated book on Washington Hall was released earlier this week.  Look for Washington Hall at Notre Dame:  Crossroads of the University, 1864-2004 at your favorite bookstore or library.  A detailed history of performing arts at Notre Dame is long-over due and this book will enrich the whole story of Notre Dame. 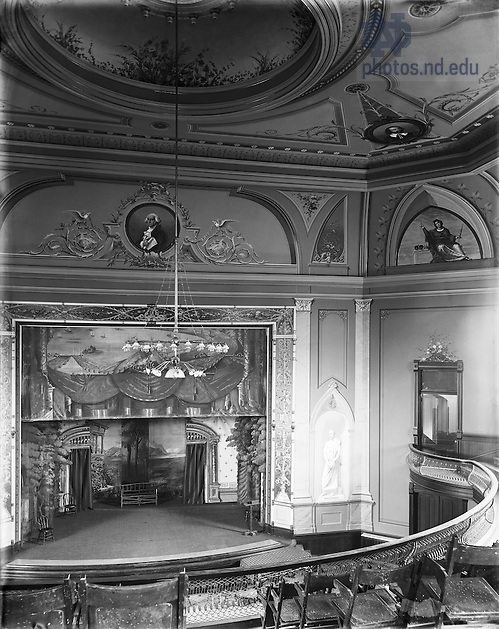 Washington Hall interior with ornate decorations, c1890s.
These murals were most likely painted over in the 1956 renovation as
the University embraced modern architecture and decor.

Pilkinton has been a regular here in the Notre Dame Archives for many years as he laboriously researched Washington Hall (built in 1881) and other exhibition halls and theatrical venues that preceded it.  His new book is a comprehensive history of the building architecturally, as well it’s role at the heart of Main Quad as the hub of many theatrical and musical performances, lectures, movie screenings, and other events.

Pilkinton was also instrumental in the development of the Theatre Chronology database, hosted on the Archives’ website, which attempts to detail every student theatrical performance ever held at Notre Dame.  Pilkinton is continuously updating the database as new performances are staged and as new information on old performances is unearthed.