Notre Dame celebrates 40 years of coeducation this fall.  While the undergraduate women who arrived in 1972 were the first class to matriculate in the regular academic year, women had been earning bachelors’, masters’, and doctorate degrees since 1917 through the Summer School Program.  One of those women gained a bit of fame during World War II because she was an unlikely aviatrix and aeronautical expert. 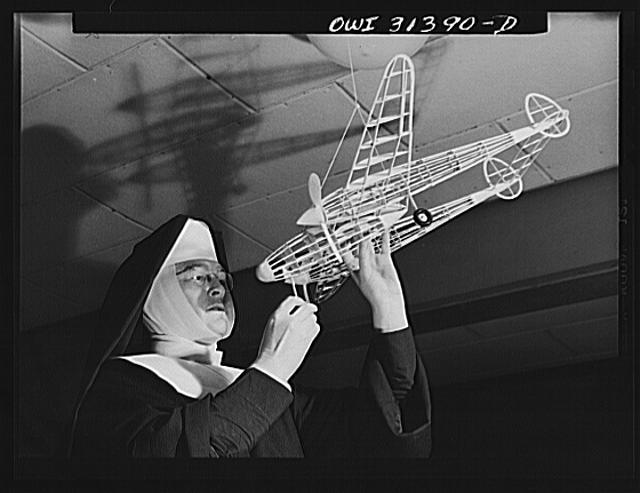 “Washington, D.C. Sister Aquinas, ‘flying nun,’ applying a little glue to the model P-38 which hangs from the ceiling of her classroom at Catholic University. A veteran of fifteen years’ teaching experience, the Sister is giving a summer Civil Aeronautics Authority course for instruction,” June 1943.
Source: Library of Congress, FSA/OWI Collection

That summer, she taught aviation at Catholic University and was involved in training through the Civil Aeronautics Authority.  Below is an announcement regarding Sister Mary Aquinas’ activities published in Scholastic, October 1, 1943:

One of Notre Dame’s religious alumnae who is doing her part in the War effort is Sister Mary Aquinas, the “flying nun.” Sister Mary Aquinas, who received her master’s degree in physics from the University, is an educational adviser to the C.A.A. in Washington. Her aeronautics course at the Catholic University of America is one of the first, if not the first, sequence of such courses for Teacher Training in universities during the summer sessions. The Sister, who believes in practicing what she teaches, is a flier. She often takes her classes on inspection and demonstration tours through aircraft factories and airports. Her group of black-hooded nuns are a familiar sight in these places. 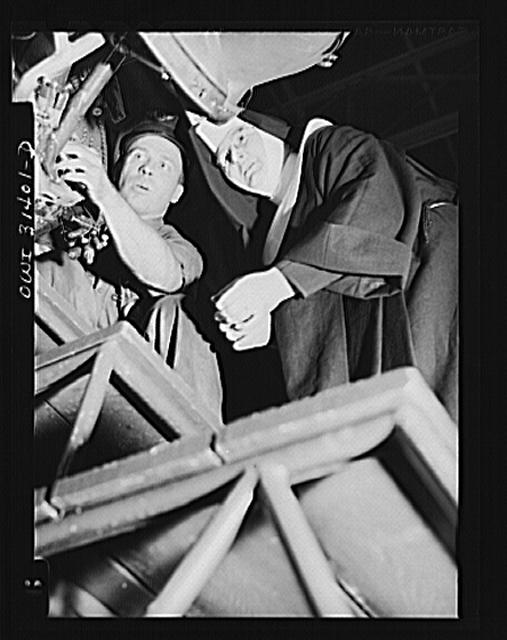 In 1957, “the Air Force Association gave her a citation for her ‘outstanding contributions’ to the nation’s security and world peace” [“No Glamor Girl”].  As part of the honor, Sister Mary Aquinas had the opportunity to fly in a T-33 jet trainer and take the control for much of the flight, making her the first nun to fly a jet. 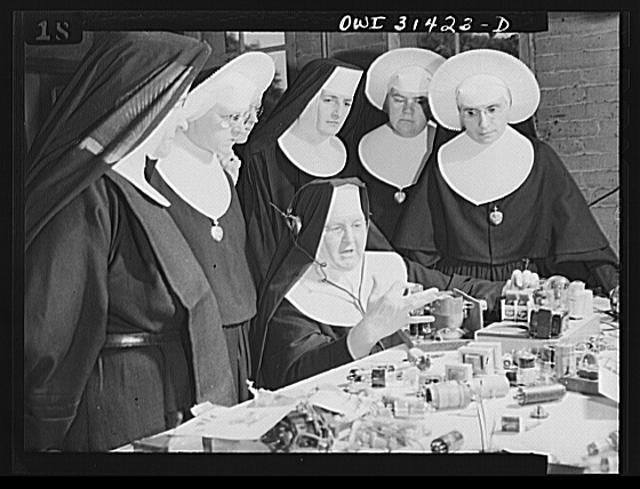 “Washington, D.C. Sister Aquinas teaching a lesson in practical radio operations to the Sisters attending her Civil Aeronautics Authority course for instructors at Catholic University,” June 1943.
The women with heart necklaces are Sisters of the Holy Cross.
Source: Library of Congress, FSA/OWI Collection

Sister Mary Aquinas was the subject of a 1956 television program The Pilot.  Her moniker as “The Flying Nun” leads many to believe she was the inspiration of the 1967-1970 television show starring Sally Field.  Furthering the thought there might be a connection, the television show was based on a The Fifteenth Pelican, a book by Tere Rios Versace, who also researched the life of Sister Mary Aquinas for an unpublished biography.  Versace’s papers can be found at the Wisconsin Historical Society Archives.

Photos of Sr. Mary Aquinas from the Library of Congress are in the public domain