Notre Dame’s military ties pre-date the Civil War, so when war broke out between the North and the South, Notre Dame inevitably became involved in the conflict.  Students and alumni joined the ranks, on both sides of the fighting.  Members of the Congregation of Holy Cross also volunteered, but in more peaceable jobs of chaplains and nurses.  Rev. William Corby was one of those priest who left his position at Notre Dame and joined up with the predominately Catholic Irish Brigade in 1861.  Corby spent the next three years as chaplain for the New York regiment. 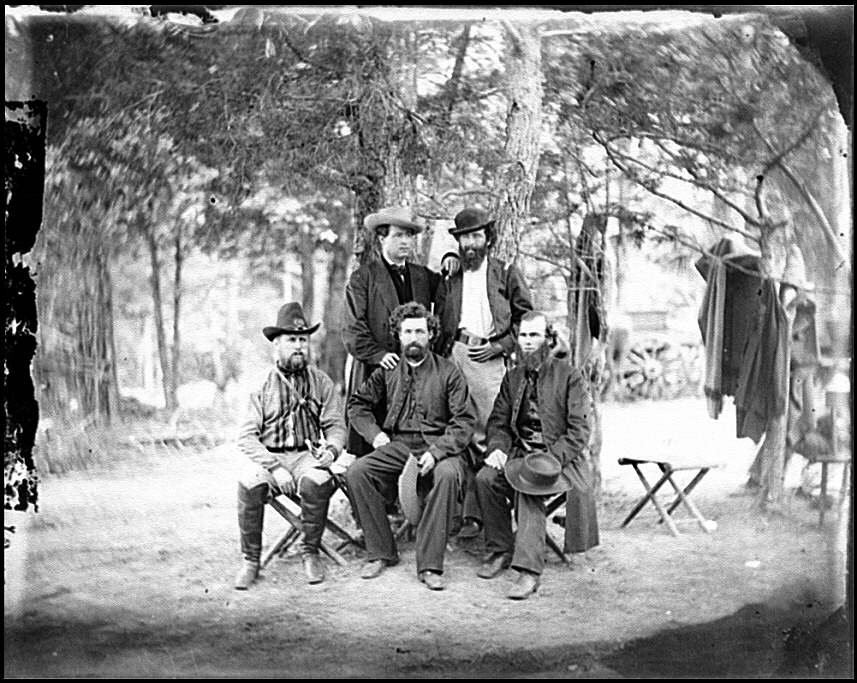 On July 1, 1863, the Irish Brigade marched into Gettysburg, Pennsylvania.  They spent much of the next day  getting their armament into position near Cemetery Hill.  Corby notes in his memoirs that he could see the Confederate lines a mile away, also preparing for battle.  Around 4pm, the conflict became heated.  Corby recounts, “The Third Corps were pressed back, and at this critical moment I proposed to give a general absolution to our men, as they had absolutely no chance to practise [sic] their religious duties during the past two or three weeks, being constantly on the march”  [Corby, page 181].

Colonel St. Clair Mulholland was attached with the Irish Brigade and later gave this account of Corby’s famous absolution [Originally published in the Philadelphia Times, reprinted in Scholastic, April 3, 1880, pages 470-471]:

There is yet a few minutes to spare before starting, and the time is occupied in one of the most impressive religious ceremonies I have ever witnessed.  The Irish Brigade, which had been commanded formerly by General Thomas Francis Meagher, and whose green flag had been unfurled in every battle in which the Army of the Potomac had been engaged from the first Bull Run to Appomattox, was now commanded by Colonel Patrick Kelly, of the Eighty-eighth New York, and formed a part of this division. The brigade stood in columns of regiments closed in mass.  As the large majority of its members were Catholics, the Chaplain of the brigade Rev. William Corby, CSC, proposed to give a general absolution to all the men before going into the fight.  While this is customary in the armies of Catholic countries of Europe, it was perhaps the first time it was ever witnessed on this continent…  Father Corby stood upon a large rock in front of the brigade, addressing the men; he explained what he was about to do, saying that each one would receive the benefit of the absolution by making a sincere Act of Contrition, and firmly resolving to embrace the first opportunity of confessing his sins, urging them to do their duty well, and reminding them of the high and sacred nature of their trust as soldiers and the noble object for which they fought.  The brigade was standing at “Order arms,” and as he closed his address, every man fell on his knees, with head bowed down. Then, stretching his right hand towards the brigade, Father Corby pronounced the words of absolution.  The scene was more than impressive, it was awe-inspiring.  Near by, stood General Hancock, surrounded by a brilliant throng of officers, who had gathered to witness this very unusual occurrence and while there was profound silence in the ranks of the Second Corps, yet over to the left, out by the peach orchard and Little Round Top, where Weed, and Vincent, and Haslett were dying, the roar of the battle rose and swelled and reechoed through the woods.  The act seemed to be in harmony with all the  surroundings.  I do not think there was a man in the brigade who did not offer up a heartfelt prayer.  For some it was their last; they knelt there in their grave-clothes — in less than half an hour many of them were numbered with the dead of July 2. Corby continued, “That general absolution was intended for all — in quantum possum — not only for our brigade, but for all, North or South, who were susceptible of it and who were about to appear before their Judge.”   A non-Catholic officer approached Corby after the Battle of Gettysburg and echoed Mulholland’s sentiments about the absolution:  that it was one of the most powerful prayers he had ever heard [Corby, page 184-185].

The Battle of Gettysburg was the bloodiest battle of the Civil War, with casualties exceeding 57,000.  Fr. Corby’s absolution of the troops stayed deeply in the imagination of the survivors for years to come.  After the war, Mulholland remained a friend of Notre Dame until his death.  In 1900, Professor Jimmy Edwards invited Mulholland to Notre Dame’s Commencement Exercises.  Mulholland regretted that he was unable to attend because he had just spent a week with veterans at Gettysburg.  He was surprised to find them still talking about the absolution:  “Instead of being forgotten it is becoming more widely known” [CEDW XI-2-c].

Corby’s famous absolution has since been immortalized, among other places, in Paul Wood’s Absolution under Fire (1891) at the Snite Museum of Art and in statues on the Gettysburg Battlefield (1910) and on Notre Dame’s campus (1911).